If you’re an orchid fan and enjoy having these beauties in your home, you’re probably also guilty of being an un-intentional orchid-slayer. But because these flowers make for ideal gifts and are often the finishing touch in a home, it’s no wonder we keep trying to keep them happy. While they may have garnered the not-entirely-untrue perception of being the fusspots of the flora kingdom, there is a vessel that can make orchid keeping less awkward. Meet the Eva Solo Orchid Pot. 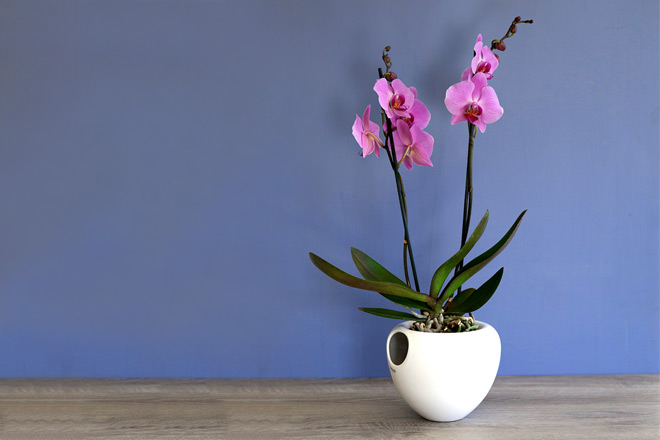 The story has been told many times before – you decide you want an orchid, you think about colours, patterns and size, you pick out your orchid and then a few weeks later the orchid decides that it wants to die.  But you gave it all the water it needed?  Well, this could have been the problem.

Orchids are one of the most delicate, architectural blooms within the flower family. They are also rather demanding when it comes to their watering frequency and environmental preferences:

Luckily, your orchid anguish can be eased because of a clever flower pot, the Eva Solo Orchid Pot, that easily ensures your orchid is being watered just enough, and at the right times.

How does the Eva Solo Orchid Pot work?

This orchid pot has been designed specifically to optimise an orchid’s growth.  This clever pot design has two bowls (the plant well and the water well) nested in one design.  The filaments joining the plant well and water well allow the orchid to pull exactly the amount of moisture it needs from the water well below.  So, it basically waters itself. Isn’t that the best way to deal with fusspots?

No more worrying about who is going to water the orchids when you go on holiday.  The orchids grow in the self-watering pot and they will constantly stay green and fresh in their Danish designed, tin-glazed, pottery pot.  The round, organic shape provides a beautiful home for the orchid and the design is set to blend in with any style of home.

How to introduce your orchid to its new pot

1. Remove the orchid from the pot you bought it in.
2. Shake off any loose soil and pop it into the top well of your orchid pot.
3. Use the hole on the side of the pot to add water to the well beneath and you will never drown or dehydrate your delicate orchid again.
4. Don’t forget to also add some orchid growing medium to the pot.

As long as you keep some water in the well at all times and feed the plant at the recommended intervals, it should thrive leaving you feeling like an orchid growing hero.

Head this way to get your very own Eva Solo Orchid Pot.