Jules Durrant is back with her third Christmas post for Spatula. Prepare yourselves, it’s a cracker – how to make Hokey Pokey, Peanut Brittle and Chocolate & Pistachio fudge. Shazam (recipes from Nigella). 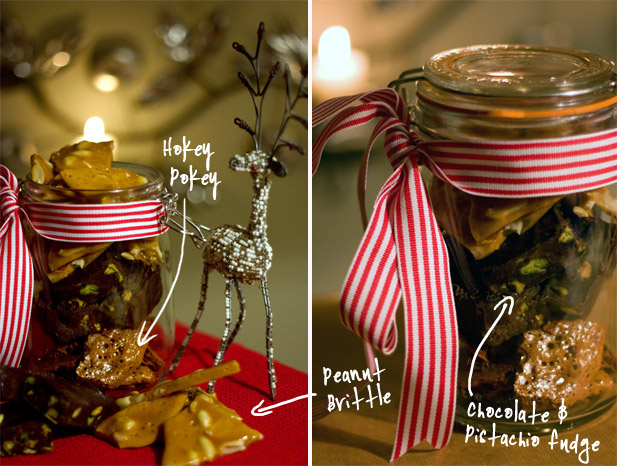 “This is it: the confectionery trifecta. Your dentist won’t be impressed but at least you’ll be popular with anybody who has a raging sweet tooth. Everything on this list is very quick and easy to make but will give the impression that you are quite the domestic goddess. People think I am some sort of baking fairy but actually, all I do is bung ingredients in a pan or shove them under an electric mixer and let the gadgetry do all the hard work.

One such gadget is the sugar thermometer. I’m not going to lie, the caramel-based delights took a few tries to get right, and eventually only worked because I learned to trust the thermometer to let the sugar get to the right temperature. Do this, and you can’t go wrong. 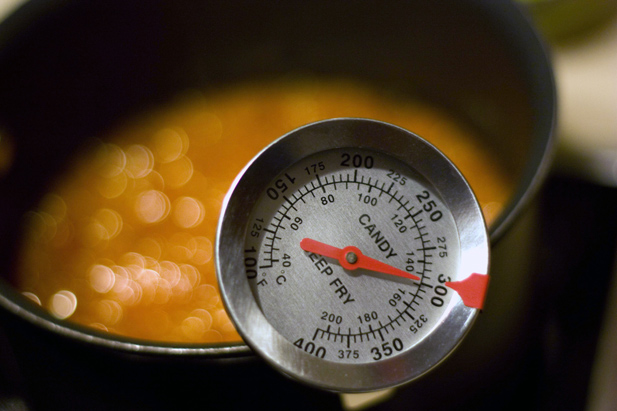 The only creative flourish you’ll need is a bit of gift wrapping: pack a classic preserving jar with the sugary treats and tie with some brightly-coloured papersham ribbon. Put a few of these under the Christmas tree and you’ll be invited back next year for sure! 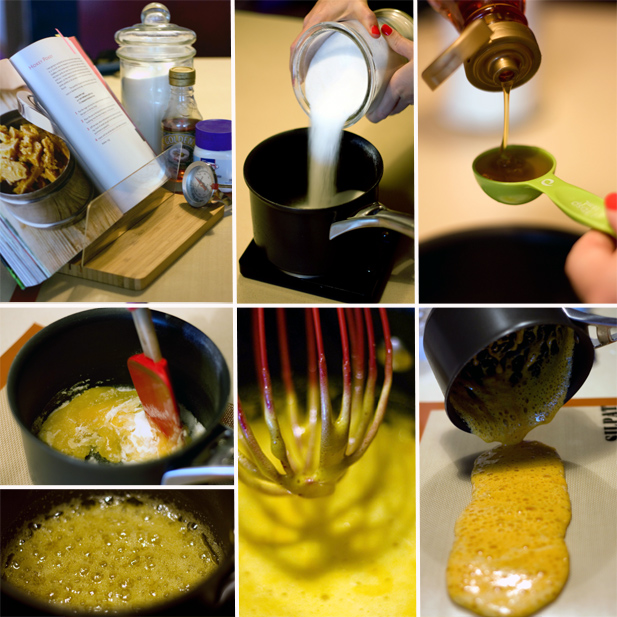 Put the sugar and syrup into a saucepan and stir together to mix. Don’t stir once the pan’s on the heat though – swirl the pan if you see the edges getting brown before the rest of the mixture.

Place the pan on the heat and let the mixture first melt, then turn to goo and then to a bubbling mass the colour of maple syrup – this will take 3 minutes or so.

The boiling sugar should turn a deep amber colour when it reaches the correct stage. Too pale and the candy will not set, too dark and the sugar will have burnt. Ideally, you should use a sugar thermometer – they are super handy and mean you won’t burn or undo the caramel, both of which will mean you need to start all over again. Aim for hard crack stage which is 150-154C.

Off the heat, whisk in the bicarbonate of soda and watch the syrup turn into a whooshing cloud of aerated pale gold. At this stage, leave it to bubble up and do not be tempted to touch or stir it.

Turn this immediately onto a piece of reusable baking parchment or greased foil [I used a Silpat mat – trust me, this thing will be your new best friend in the kitchen].

Leave until set and then bash at it, so that it splinters into many glinting pieces. 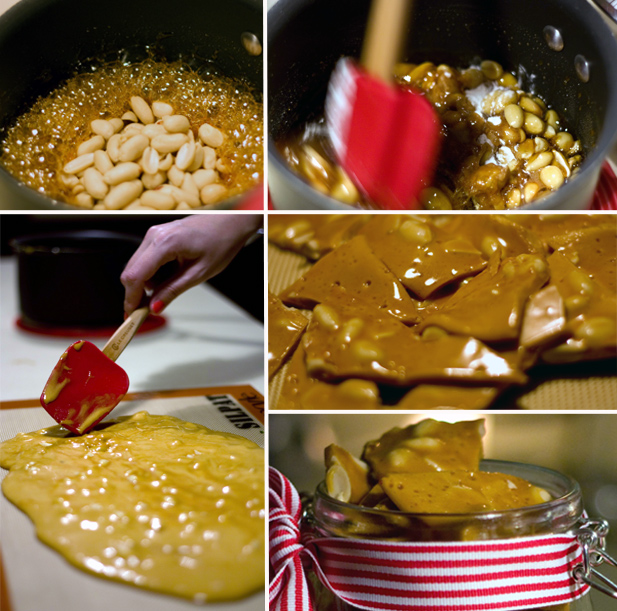 Get out your Silpat mat or put some foil on a baking sheet and butter it. Sit it by the stove, waiting to receive the brittle once it’s ready to pour.

Put the sugar, water and syrup into a pan, bring to the boil gently, then turn up the heat and let it boil for five minutes or until a rich deep amber. It may need more than five minutes but it’s best to aim for five and then watch the colour. It may smoke a little before it’s ready. [If, like me, you need a little reassurance about these sorts of things, get yourself a sugar thermometer and aim for 150-154C]

Take the pan off the heat and, with a wooden spoon, stir in the nuts, followed by the vanilla, butter and bicarbonate of soda. You will have a golden, frothy, hot and gooey mixture.

Pour this briskly onto the waiting parchment or foil, using your wooden spoon to coax and pull it to make a nut-studded sheet, puddle-shaped though it may be, rather than a heap. Leave it to cool.

You may find it easier to do several small batches like this, rather than multiplying quantities as you cook.

Ingredients: (Makes 64 pieces)
350g dark chocolate, at least 70% cocoa solids, chopped
1 x 397g can condensed milk [try to have some self-control – unlike me – and not scoff the lot before it makes its way into the pan]
30g butter
pinch salt
150g unsalted pistachios, shells removed 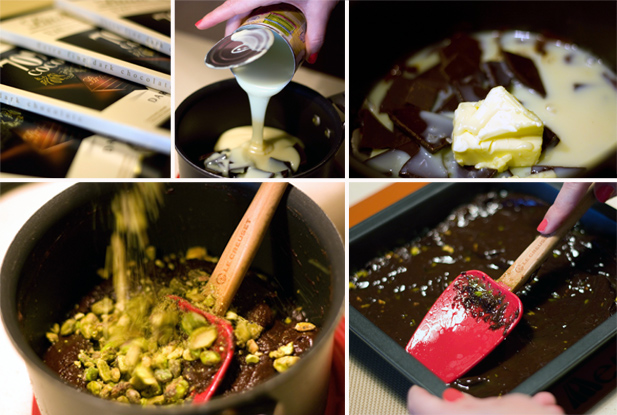 Place the chopped chocolate, condensed milk, butter and salt into a heavy-based pan over a low heat and stir until melted and well combined.

Place the nuts into a freezer bag and bash them with a rolling pin, until broken up into some large and some small pieces.
Add the nuts to the melted chocolate mixture and stir well.

Pour the mixture into a 23cm square tray, smoothing the top. Let the fudge cool, then refrigerate until set.

Cut into small pieces – cutting 7 x 7 lines in the tin to give 64 pieces best achieves this.

It’s best to keep the fudge cold until you are able to eat or package it. Once cut, the fudge can also be kept in the freezer if you decide to eat it all yourself instead of giving it away for Christmas. And who would blame you?”

Thanks for this super post, Jules. We like it a lot. We also like the albino reindeer featured beside the beautifully packaged trifector. Sure, he doesn’t have a rudolph nose, but that’s one spunky deer. Available at a South African traffic light near you. 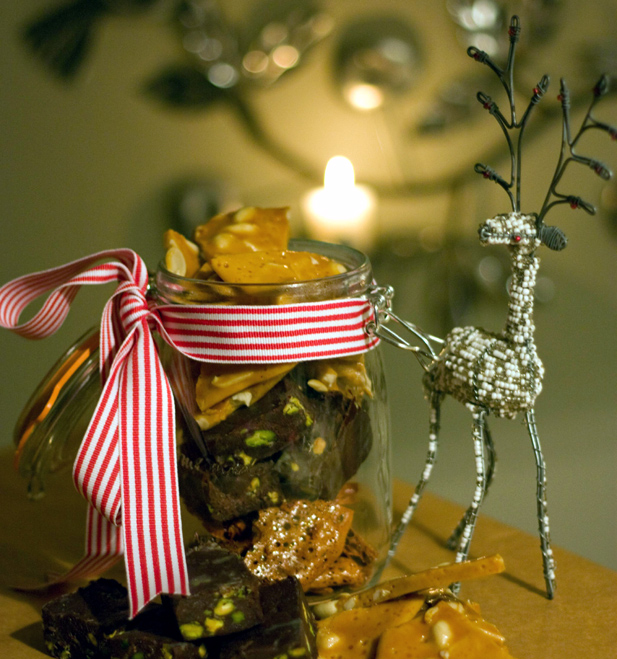