Scrumptious: an interview with Jane-Anne Hobbs

Jane-Anne Hobbs is one of the leading ladies in our SA food blogging scene and her new book, Scrumptious, is a winner. Determined for her recipes to be fool-proof and for her food to be cooked with love, sincerity and patience, her book is full of recipes that make home entertaining a breeze. Read on for Jane-Anne’s food-styling tips, her experience of the blog to book process and to find out her top kitchen tools. 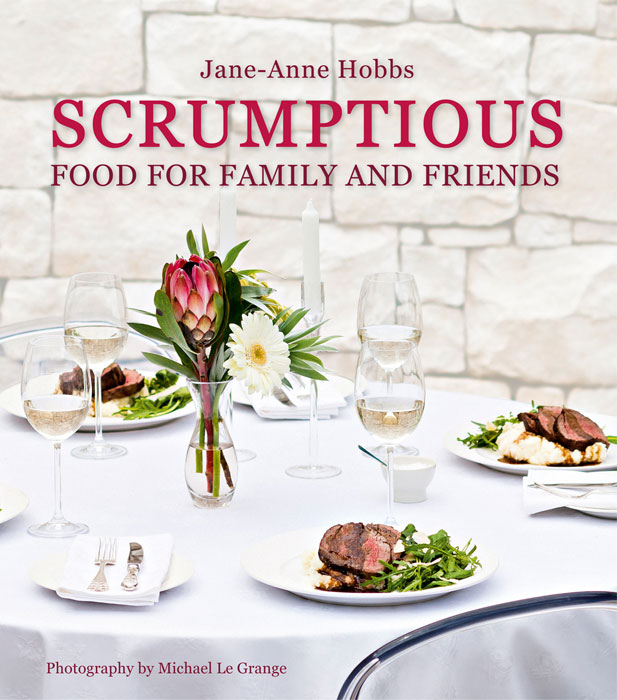 How did your blog come about? Tell us about the Scrumptious journey.

In 2007, working as a freelance journalist, I was researching an article about a growing trend called blogging. I wanted to see how easy it was to set up a blog, and so I did. After a while, when recipes started to crowd out the other general posts, I set up a separate blog, and called it Scrumptious.  Before long, the blog developed from a hobby into a full-blown obsession and I realised that if I was to build Scrumptious into something really worthwhile and interesting, I’d have to pour all my efforts into creating compelling, accurate and inspiring content.  It was often a dispiriting process because there were times when I felt I was writing in a vacuum.

Because I’m determined to be an independent voice, I’ve never accepted sponsorship, adverts or freebies, so I haven’t earned a cent from the blog. I’m not complaining, though: Scrumptious has launched great tangential opportunities for me as a professional recipe developer and social media consultant.

Fill us in on the blog to book process?

The most difficult thing about putting my first cookbook together was deciding what to leave out. There are hundreds of recipes in my archive but my publishers, Random House Struik, wanted at least 75% of the book to comprise entirely new recipes. This made sense to me – why would one want to buy a cookbook if all the recipes were already available online for free?  I had just nine weeks to come up with 68 recipes and I was determined that they should not only be entirely new and original but that they should also be thoroughly tested. The process was exhausting and there were many times when I stumbled into bed in the early hours half-weeping with frustration. I found, however, that intense pressure is good for the creative process!

The other challenge was to create a book with a cohesive theme and message. I wanted to write a good, useful, accurate cookbook that was more than a random collection of copied and pasted recipes; a book that would encourage and inspire cooks to stretch themselves in the kitchen. It took three months and much hand-wringing to write a four-page introduction but I’m happy with it, because it sums up my attitude to the importance of detail, finesse, planning and patience in home cooking. 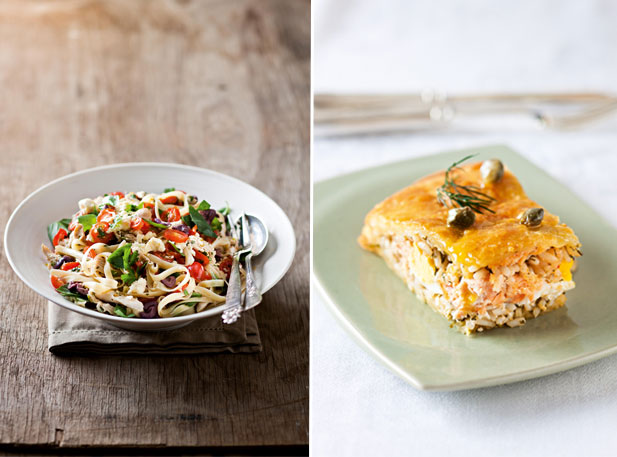 You styled the book yourself. Can you give us a few of your food styling tips?

I’m not a great fan of over-styled food photographs crammed with rustic kitchen props because I find them quite self-conscious. For me, the only thing that matters on the page is the food itself, which must look fresh, colourful and utterly mouth-watering. Working in conjunction with the book’s designer and photographer, I settled on a pared-down, simple look designed to make the food ‘pop’ from the page in all its lusciousness. There really isn’t any mystery to making food look good on a page – if the ingredients are of top quality and very fresh, and the food has come straight from the kitchen, the dish will shimmer in front of the camera lens without needing any excessive tweaking. Apart from the occasional light spritz of water over salad leaves and basting meat and poultry with the hot pan juices, no artifice was used in styling the food.

The best tip I can give to anyone styling a plate of food is not to fuss too much over the way the food and its garnishes are arranged on the plate. A bowl of salad that has been arranged leaf by leaf, for example, has a stiff look about it. Rather allow the food to tumble naturally into its bowl or onto a platter and then use a pair of chopsticks or tweezers to neaten up any bits that have strayed, or to pull one or two starring ingredients to the top of the pile. 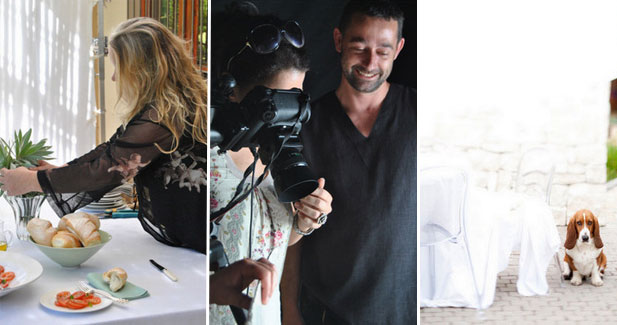 Which three kitchen tools would you consider essential in every kitchen?

Several sharp microplanes of different grating patterns are indispensible in my kitchen. They take all the hassle out of grating hard cheeses and are fantastic at reducing fresh garlic and ginger to fine shreds in seconds (and you don’t even need to peel the garlic!). Another gadget I can’t do without is an old-fashioned potato ricer, which is the only foolproof way of producing absolutely smooth and lump-free mash. Finally, a large stone mortar and pestle is an essential tool in any kitchen. Stick blenders with jug attachments are useful but they they can’t produce the same range of textures as a mortar and pestle. I inherited an enormous white marble chemist’s mortar from my grandfather and I use it every day for grinding spices, herbs and pastes.

I am a fan of Tangerine and Cinnamon, a wonderfully cerebral food blog written by Dr Sarah Emily Duff. Primarily a historian of South African childhood, Sarah is also interested in the histories of food, medicine and consumerism.  Her blog is packed with fascinating links relating to food and culture and her regular ‘Food Pseudery’ feature, gently poking fun at the worst excesses of pretentious food writing, keeps me in stitches. I don’t regularly read international food blogs because there are so many excellent local ones, among them Kit Heathcock’s Food and Family, Bern le Roux’s Live to Eat, Thuli Gogela’s Mzansi Style Cuisine and Michael Olivier’s blog.

You collect cookbooks. If you could choose just one, which would it be?

No contest. Simon Hopkinson’s Roast Chicken and Other Stories. 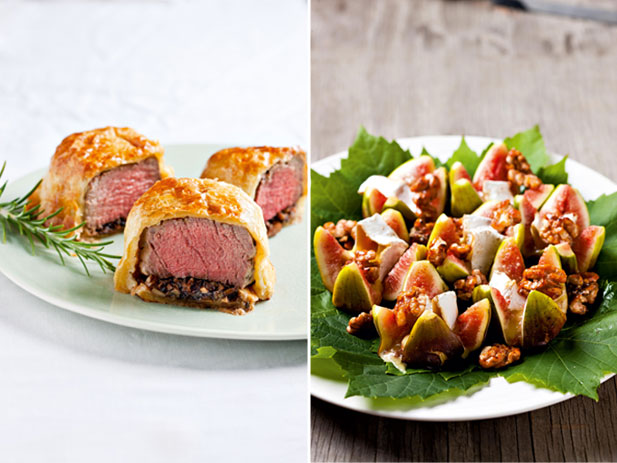 Our basset puppy is a little velvet bundle with fangs at one end and a lot of poo at the other.  He eats like two horses, growls ferociously at pillows, trips over his own ears when he runs down the corridor and has a pink tummy like a piglet’s. My entire family is in raptures over Harley. 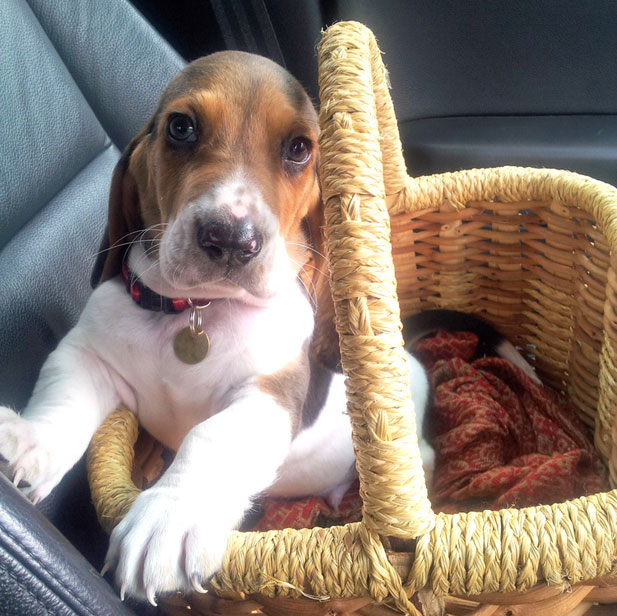 A hearty thanks to Jane-Anne for answering all of our questions.

For a chance to win a signed copy of the new book, head this way.
Give one of Jane-Anne’s winning recipes for hazelnut and chocolate cheese cake a spin.
Buy a copy of Scrumptious on Yuppiechef.com