There’s nothing quite like being super excited about something and having some doofus (like me last year) stomp all over your happily created parade. If you’re one of the people trying to embrace and reclaim the magic of the season by enjoying the giddy feeling of doing whimsical things, I have something fun you might like to add to your repertoire. The best thing about this one is that not only will your whole home (or office) waft with the irresistible aroma of Christmas, but anyone who tries them seems to undergo a little transformation of their own. Cinnamon roasted nuts, done the German way, have that kind of power. 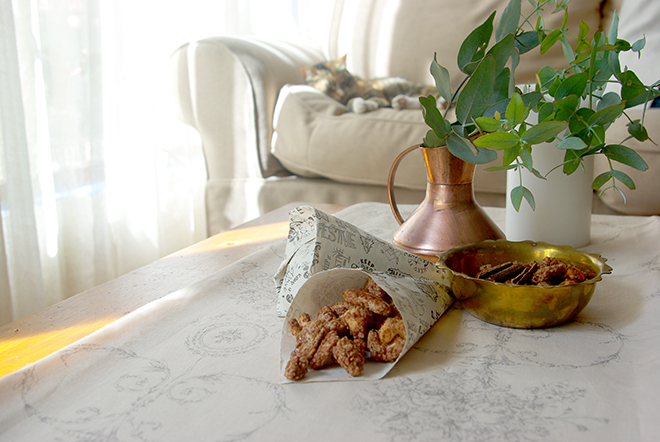 I had the unforgettable experience of helping out at a traditional German Christmas market in Chicago several years ago, in a sweet shop, known as Sweet Castle. I can quite comfortably say that the owner, Herman’s, cinnamon roasted almonds or ‘gebrannte Mandeln‘ changed Christmas for me. Completely. Sure, after a month of markets my clothing was lined with cinnamon but that smell crept up into my nostalgia preserving olfactory senses and pretty much set up camp there.

Now, whenever I smell the wonderful scent of almonds toasting away in a slowly burning caramelised sugar and cinnamon syrup, I become an instant convert and fall in love with Christmas all over again.

Here’s the recipe. And let me just say before you get stuck in, that I tried several different ones in the hope of finding something that comes close to the taste of the cinnamon roasted nuts I remember. There are some complicated recipes out there – many requiring egg white, nutmeg, vanilla and even oven baking. None of them came close. I eventually discovered one on a German website that provided the best starting point. Here’s my tweaked, super easy version: 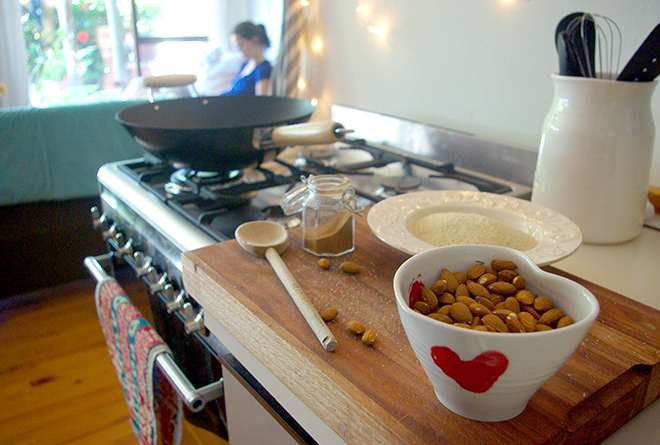 1. Weigh out your nuts and sugar and set them aside.
2. I used a wok to make these as it makes for easier mixing and coating. A large pan would also work, you’d just have to be more mindful of mixing towards the centre. Set the stove on a medium heat and pour in your water, sugar and cinnamon.
3. Stir it together with a silicone spatula (much easier to clean) and bring it to a rolling simmer.
4. Many recipes tell you to wait until it caramelises and becomes sticky before adding the nuts. I add them in right now, the minute your mixture is frothing. Then turn the heat way down.
5. Now comes the bit that requires patience. Just keep stirring. I suggest putting some good ol’ Christmas tunes on and enjoying the catharsis that comes with watching the almonds tumble around in the slowly caramelising sugar. Sometimes it’s wonderful to do nothing and something at the same time. 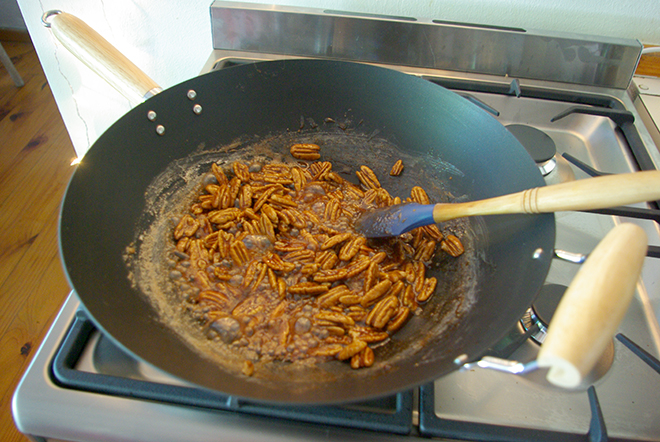 6. The water will keep evaporating and your toasting nuts will go from stodgy porridge consistency, to sticky lump, to crumbling sandlike texture. This is the part where many other recipes say you’re done. You’re not. Keep stirring.
7. The sugar and cinnamon without water will begin to caramelise. And now your nuts also begin to toast nicely. Keep stirring and getting everything coated.
8. They’re done when the sugar and cinnamon is crusted on the nuts and they have a beautiful sheen to them. Also they smell heavenly.
9. Pour them out onto a butter greased baking tray and spread apart with the spatula. Leave them to cool while breaking them apart in between so they don’t harden attached in a great big clump. 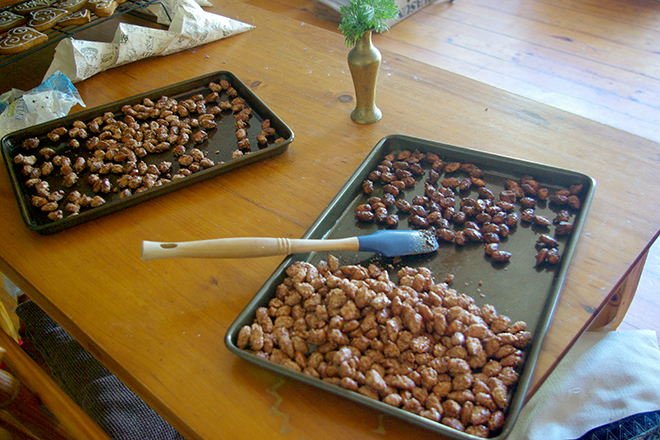 These nuts taste best served slightly warm, but you can easily reheat them again on an oven tray on 50°C for about 15 minutes. I made these in our test kitchen for our team and I’m pretty sure there are no more Christmas grinches lurking about. 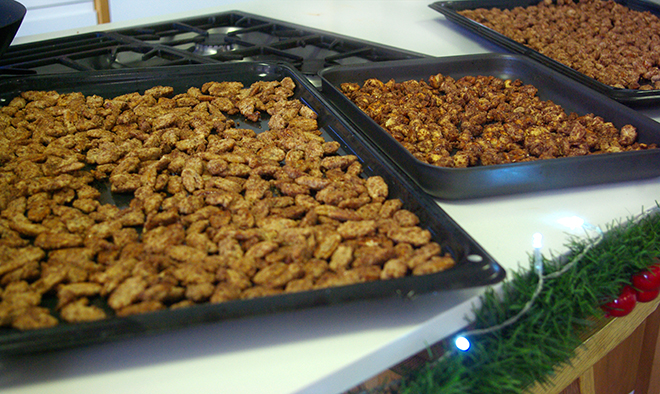 Make a batch of these and not only will your home fill with the wonderful scent of the festive season, but guests, family and friends walking in will be instantly coerced to the light merry side and indulge in some sugar crusted goodness. 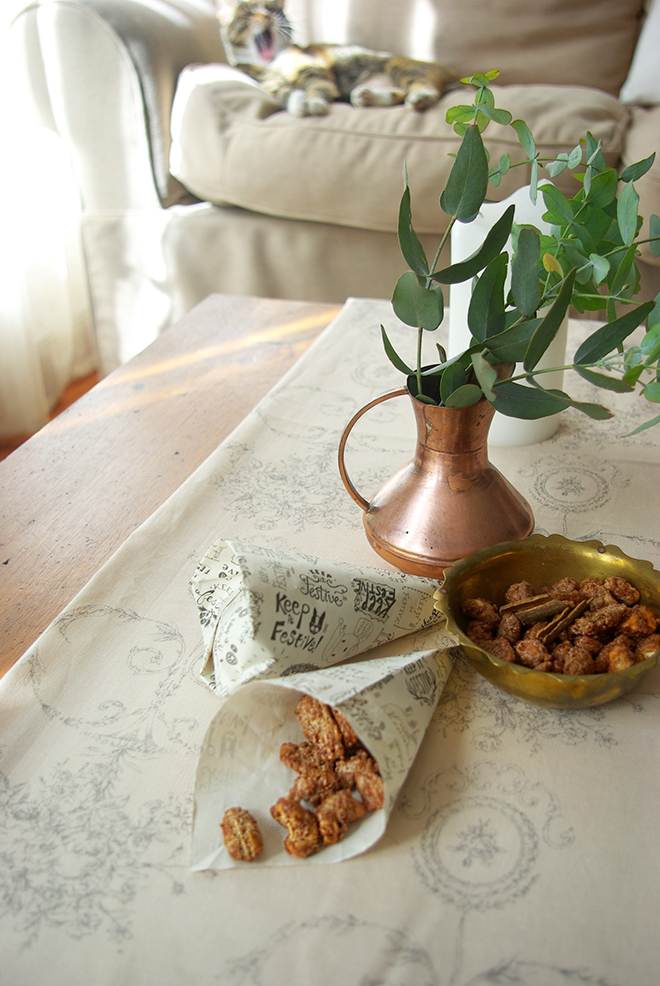 Most German Christmas markets sell these roasted nuts in little paper cones or Zucker Tütchen, If you want to make and fold them at home, watch this little video of me making these in our test kitchen.

What’s your one Christmas tradition that really kicks the season off for you? The thing that without it, it just doesn’t feel like the festivities are here yet. For me, it’s these cinnamon roasted pecans, almonds and cashews and all the memories that come tumbling back whenever I share these with people who haven’t yet been won over by their charms.