These days, most people have cottoned on to the fact that olive oil is way better for us than normal oil. Sunflower oil is out. Here is the first half of a two part Tremendous Trivia dedicated to our liquid gold friend – l’huile d’olive.

A bit of history: the first cultivation of olives began in roughly 2000 BC in Crete and today Greece is the world’s largest producer of Extra Virgin olive oil (they also have the highest per capita consumption of olive oil in the world). At the first Olympic Games in Ancient Greece (776 BC) an olive branch was awarded to the winners. At these early Olympic meets the athletes used to rub olive oil all over their bodies and compete naked. Hardcore. These days athletes take steroids and wear leotards.

Here in South Africa, we jumped on the olive oil wagon in the 1990’s, and now consume about 3000 tons of table olives and some 700 tons of olive oil ever year.

Olive oil is technically a fruit juice rather than an oil as the olives are pressed (like an orange) to release their juices. Because of its fruit juicey qualities, it is sensitive to heat and light. Ideally, it should be stored in a dark glass bottle at 14 degress celcius.

Olive oil is made only from green olives and the quality boils down to the amount of processing (less being more).

There is an International Olive Oil Council (IOOC) who protect the world from olive oil pyramid schemes and substandard oil. The IOOC have created internationally recognised quality guidelines which enable consumers to have confidence in the quality of oil they buy.

The United States doesn’t recognise the guidelines of the IOOC and have developed their own grades – Fancy, Choice, Standard, and Substandard. Unfortunately, their separatist oil grading policy has backfired and resulted in a lot of oil in the US being labelled Extra Virgin when it isn’t at all.

Because of the independent grading, olive oil destined for the US has to be carefully monitored. In March 2008 four hundred members of the Italian police force confiscated eighty-five farms from some naughty farmers, for labelling average quality oils gathered from small, unimpressive Mediterranean countries as Italian Extra Virgin Olive Oil. The manoeuvre was aptly named “Operation Golden Oil”.

On the topic of Italian policeman, we discovered with delight that they carry white genuine leather man-bags, and have matching hats and white leather gun holsters. These crime-busters sure know how to dress. 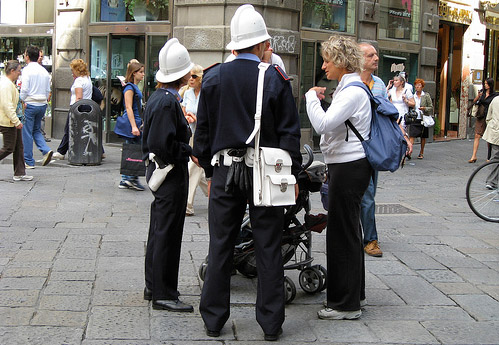