There are some things life just wouldn’t be the same without. Milk is one such thing, and the topic of today’s Tremendous Trivia. 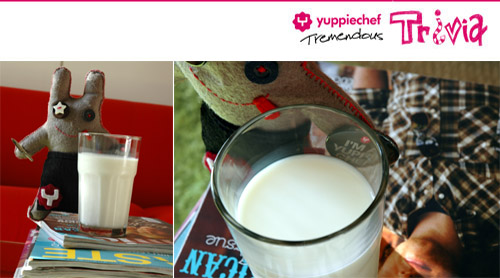 Milk is the first thing you ever drink (unless there is a serious mix-up at the hospital). Humans are the only mammals that continue to drink milk after infancy, which is a bit crazy as 75% of humans are lactose intolerant to some degree.

Milk was first delivered to doorsteps in bottles in America, on January 11, 1878. In South Africa, the concept of milk  being delivered to our doors and staying there long enough for the milkman to get off the front step is foreign. But in other nations, the quaint tradition continues.

Something most people get wrong about milk is what it really means for it to be skim, 2%, low-fat or fat-free. Skim and fat-free are actually exactly the same thing – milk with the lowest fat content possible. It is impossible to remove all fat from milk and the lowest milkfat content is about 0.4%. Cream, on the other hand clocks in at a weighty 25%.

Most people are more familiar with kilojoules, so here are some details per 250ml: 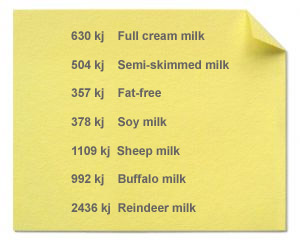 You probably don’t need much convincing that drinking reindeer milk is not cool. We think the fact that it is so high in fat is the world’s way of telling us to leave the reindeers alone.

You may have heard the terms homogenization and pasteurization thrown around.

Homogenization is an important process. In a nutshell, fresh milk is pumped under high pressure in order to break up the little milky bits into even smaller bits. This stabilizes the emulsion of all the milkfat and other solids – so that the milk doesn’t end up separating into watery liquid with white floaters (like when you freeze and defrost it, that messes with the emulsion).

Pasteurization involves heating the milk up to high temperatures to kill the creatures lurking inside. It’s how milk-makers ensure we don’t pick up diseases. Next time you are on a farm and considering knocking back some good old unpasteurized milk, keep in mind the host of microbacteria you are inviting into your body.

There is an argument for drinking milk as it comes, free from tampering and scientific intervention. In fact some of the more die-hard organic dairy farmers would probably string us up for even giving air time to the process of pasteurization. Oh well.

Are you a milk drinker? Do you guzzle it by the glass? Good for you. You’ll probably have wonderful bones in your old age.