Ever wondered how pro bakers get perfectly neat two-tone icing stripes? Meet the Cupcake Creations Icing Duets Decorating Kit. So, if you’re looking into jazzing up your baked goodies, this handy tool is worth checking out. 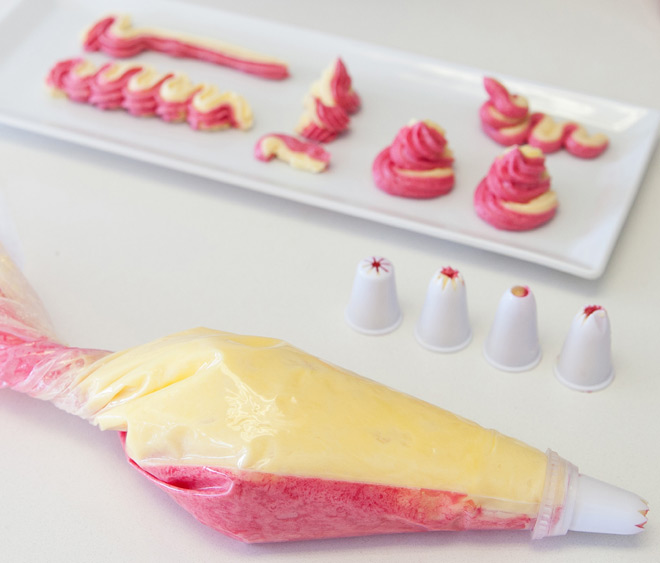 The kit comes with ten dual chamber piping bags, six nozzles and one split coupler. The bags and coupler ensure that both colours of icing are kept separate but are piped out simultaneously for sugary, two-tone perfection. Think that’s neat? Here’s how it works. 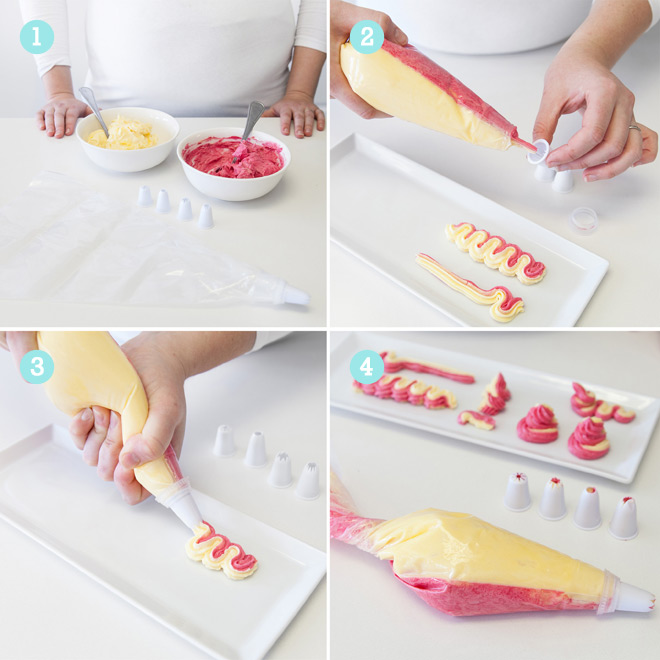 1. Mix up some simple buttercream icing, making it a little more loose, for easier piping. Divide the buttercream into two bowls and mix your choice of colour into one or both to create two different colours.
2. The bag is divided into two sections. Snip off the narrow tip of the bag. Now you need the coupler – the see-through plastic nozzle that comes in two parts. Slide each half of the coupler into the separate compartments of the piping bag. You will need to make sure the coupler is firmly wedged into the tip of the bag. The coupler both keeps the two icing colours separate right down into the tip, and allows you to change nozzles while you are working, without having to start a whole new bag or empty the one you’re working with.
3. Stand the icing bag in a tall jug or glass and spoon icing in, first one side and then the other. Then screw on the nozzle of your choice. Twist or clamp the top of the bag shut and squeeze evenly to pipe beautiful, bi-coloured stripes on your cakes and cupcakes.
4. Experiment with all the different nozzle types and pipe until your heart’s content.

We’ve been told the narrow opening of the double-pocketed piping bag can be tough to squeeze icing through but we have a recipe kindly donated by Nasreen, one of our customers. It’s a simple buttercream recipe, but it seems to work especially well with this piping bag.

If you have a thing for nifty gadgets check out some more products in our How it works series.

Sometimes even seemingly simple things deserve a little more explanation. Seen something interesting but still wondering how it works? Leave us a comment below and we’d be happy to oblige.