If you’re in any doubt that breakfast can be the best meal of the day, we hope this recipe puts your mind at ease. Sticky and delicious, these toasty crumpets served with spiced pear compote, crispy bacon and a good soaking of syrup are what lazy Saturday mornings should be all about. Just add your favourite people, some great music and the weekend papers. 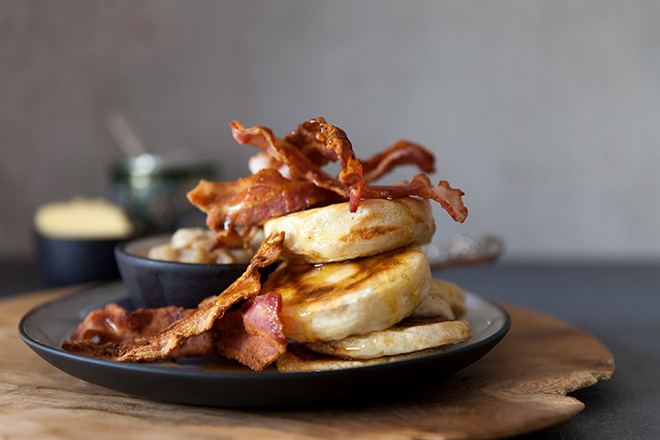 1. Place the flour, bicarb and salt in a large bowl and stir in the sugar and yeast making a well in the centre. Pour in the warm milk and water and mix up until you have quite a thick batter. Beat well until completely combined and cover with a damp tea towel.

2. Leave in a warm place to rise for about an hour until it’s a light, spongy texture.

3. Heat a non-stick frying pan over a very low heat with a drop of butter. Wipe the pan with kitchen paper to remove excess butter. Place the greased egg rings in the pan and leave to heat up for a couple of minutes.

4. Pour in enough mixture (about 2 tablespoons) to fill the rings just over halfway up the sides. Leave to cook until lots of small holes appear on the surface and the batter has just dried out. This will take about 8–10 minutes.

5. Remove the rings and flip the crumpets to cook for a further minute or two on the other side. Cool the first batch of crumpets on a wire rack (to prevent them from sweating) while you cook the remaining crumpets.

6. To make the spiced pear compote, peel and chop the pears. Cook the pears along with sugar, cinnamon and lemon juice and grated zest at a gentle heat until the sugar has completely dissolved then bring to the boil for 5 minutes.

7. Reduce heat to a gentle simmer and cook for a further 10 minutes until the pears are tender. If you have finished making your crumpets already, pop them on a plate and keep them in the warming drawer of the oven or simply on an oven rack with the temperature at its lowest. 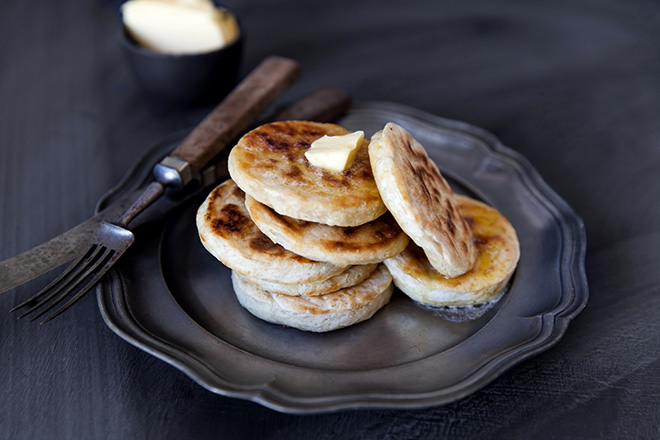 To make these extra special, top with warm crispy bacon pieces, your homemade spiced pear compote and a generous drizzle of syrup. 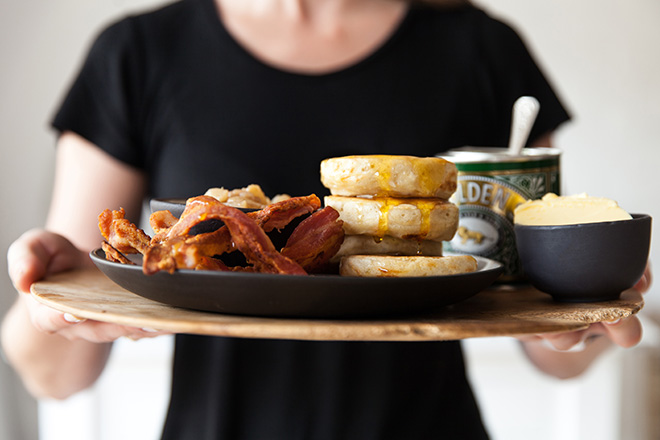 We’ll send a personal letter of thanks to the Canadians for sharing their bacon and maple syrup combo with the world.