I had been working at Yuppiechef all of two months. I was still the shy girl in the corridors, who kept to herself near the coffee station (which, if you know me, is very odd indeed). I hadn’t really raked up enough leave to be absent on my birthday so in to work I went. And what I arrived to – I found out much later –  wasn’t actually the norm at my still fledgling job. It was the first. The first of so many to come that on any given day you’ll come into the office and think there’s a farewell – but actually, it’s a hello. A ‘hello, we see you and are so grateful to have you because you’re awesome.’ And it’s why most of us are rarely absent on our birthdays.

That day, almost three years ago, my desk was covered from side to side in the heady scent of brightly coloured petals and pollens. I’d only ever heard of the flour bomb – the bad kind that is often preceded by eggs or water. But on that day, my birthday, two girls from my team decided to execute ‘the flower bomb’. There was even a packet of bacon. The bacon giver and I are now best friends. 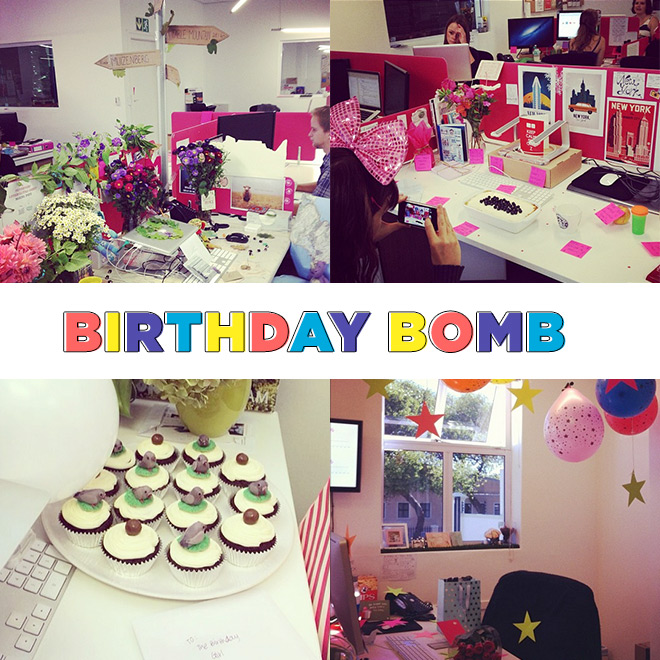 It caught on. Since then there have been many a crazy themed birthday bombs: all things New York for an upcoming travel dream, a nautical Zanzibarean escape, a wild and free hiking adventure, skull candy balloons, black and gold glitter, all things cycling – one could go on. There is a birthday calendar viewable to all. There’s even a birthday bomb budget as part of staff welfare.

In any case – it’s something we all take great joy in conspiring around and keeping hushed until the big reveal. It’s also particularly fun to pretend like the whole office has forgotten and then startle the individual with a post lunch brouhaha.

To us, it’s a team building of sorts, and the phenomenon of the birthday bomb is one of the unlikely reasons we’re almost always at work on our birthdays – grateful to be born and working with such a fun bunch of colleagues.

What are your best birthday stories and traditions? We want to hear how you celebrate.