Most people would argue that bacon is a food group, a dietary or life requirement and a godsend all rolled into one. What is it that make these crispy strips of pork so irresistible? Who knows. But when you can add something so scrumptious to breakfast, dinner and dessert, it’s got to be quite something. Drizzled with Canada’s best maple syrup, ensconced in a French toast like batter, these bacon cupcakes are a just ridiculous. Try them. 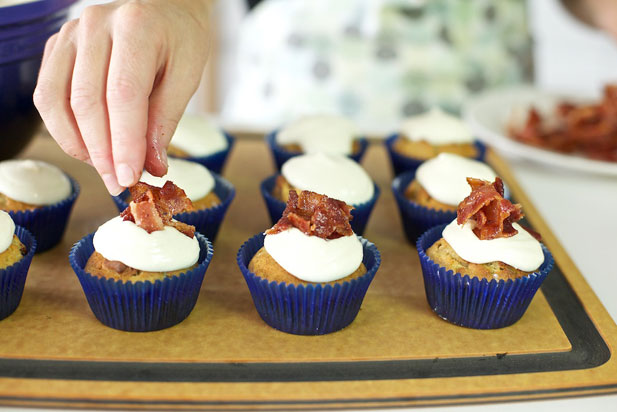 Method
1. Preheat the oven to 180°C. Place paper liners in a 12 cup muffin tin.
2. Prepare the cupcakes. Combine the flour, pudding mix, baking powder, cinnamon, nutmeg and salt in a bowl with a whisk.
3. In a separate bowl, cream the butter and sugars with a mixer on low speed until combined for about 6 to 8 minutes. Gradually mix in the vanilla and eggs. Scrape down the sides of the bowl; continue mixing until light and fluffy. Add the flour mixture in three batches, alternating with the maple syrup and milk, folding in after each addition and ending with flour.
5. Mix until the ingredients are just combined (don’t over mix) and then gently fold in the bacon.
6. Spoon the batter into the prepared muffin tin, filling each cup about three-quarters of the way. Bake until a toothpick inserted in the center comes out clean, about 40 minutes. Cool completely.

Meanwhile, prepare the frosting. Beat the cream cheese and butter with a mixer on medium speed until creamy. Add the confectioners’ sugar, maple syrup and cinnamon; beat until combined. Pipe onto the cooled cupcakes and top with chopped bacon and an extra drizzle of maple syrup.

Sometimes it’s the strangest combinations that make people turn their heads. You’re going to want to try these.