A Guide to Ice Cream

Ice-cream is great. So many types, so little time. Today’s trivia piece is a shout out to this frozen friend.

In 500 BC the ancient Greeks used to sell snow mixed with honey and fruit in the markets of Athens. It seems that’s where it all began for ice-cream. The Persians were the first to master the art of storing ice which meant ice-cream became something people could eat all year round. In 50 AD, Rome’s nastiest Emperor Nero is recorded as having eaten ice mixed with fruit (pity no one thought to poison it). 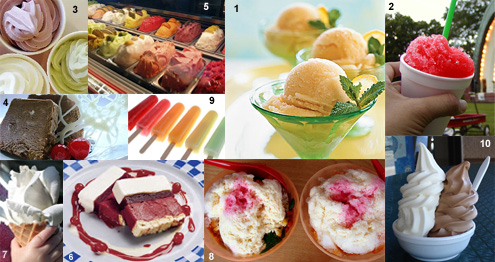 Get your ice-cream facts straight:

1. Sorbet is 100% dairy-free, and made from frozen water and fruit puree.
2. Americans love their Snowcones – which we call Slush Puppies – consisting of crushed ice topped with flavoured syrup.
3. Frozen yoghurt is a good alternative if you’re watching your kilojoule intake as it’s made from yogurt and milk instead of cream, and therefore lower in fat than ice-cream.
4. Semi-freddo is that strange desert you had once that was not-quite-cold and creamy. It’s a semi-frozen dessert combining ice-cream with either cake, whipped cream or mousse.
5. Trust the Italians to have their own regional variant of ice-cream – Gelato. It’s a bit lower in sugar and fat than normal ice-cream
6. Cassata is a sliced traditional Italian desert, often green and white, and containing dried fruit and nuts.
7. Dondurma is the brainchild of the Turks. Chewy ice-cream, getting it’s tough texture from salep (flour) and mastic (resin). If you go to Istanbul, make sure you get your hands on some. There’s nothing quite like it.
8. Ais Kacang is Malaysia’s flagship frozen desert. Asians often add beans to their puddings, and this special concoction contains shaved ice, chocolate syrup and red kidney beans. Yup.
9. Ice lollies are a child-friendly favourite. They can be home-made easily from juice, or even yogurt.
10. Softserve is ice-cream squirted from a machine and wound beautifully onto a cone or into a tub. Best enjoyed at the beach, and with a chocolate flake. We’ve even seen cupcakes iced like softserves!

Most children spend at least a few hours of their youth dreaming up the weirdest ice-cream flavour they can. Unfortunately, some people go on to make these realities, resulting in things like Squid Ink, Octopus, Bacon Fat and Horse meat ice-cream (it’s true, we found them on strange websites).

Heladeria Coromoto – an ice-cream shop in Merida, Venezuela – is recorded by the Guinesss Book of world records as having served the most flavours of ice-cream in the world (over 900) including Spaghetti and cheese, Coca-cola, Guerkin, Mushrooms in wine, Beef, Cream of Crab, Eggs, Sardines in Brandy… It was set up in 1980 by a Portuguese immigrant, Manuel da Silva Oliveira (read more here).

If you think you might like to try your hand at making your own ice-cream, we sell three ice-cream machines (from Princess, Cuisipro and Krups) as well as some books to get you started.

If you’re wondering why we’re talking about ice-cream now as winter starts, we’d like to suggest that you don’t attempt to apply logic to the seletion of the themes of the Tremendous Trivia series. The left-field is where the fun happens.