Myth or Magic: Does a wooden spoon stop a pot from boiling over?

Remember our myth or magic series, which kicked off with woeful onion tears? Well, we’ve stumbled upon another kitchen legend that warranted some semi-thorough testing. Ever had to run to the rescue of an over-boiling pot? You might be interested to know whether a wooden spoon can ease the steamy tension.

Since the invention of fire, cave men and women have been running to the rescue of their rapidly bubbling dinners. We’re not too sure who the first foodie was to set a spoon over the cooking pot but it sparked the belief that a wooden spoon placed over a pot prevents the contents from boiling over.

So, to test this myth, we equipped ourselves with a pot, which just so happened to be a beautiful Caribbean blue Le Creuset cast iron one. Next in our myth-busting cavalry, an array of wooden spoons. Yes, we dipped them in pink. It’s our weakness. 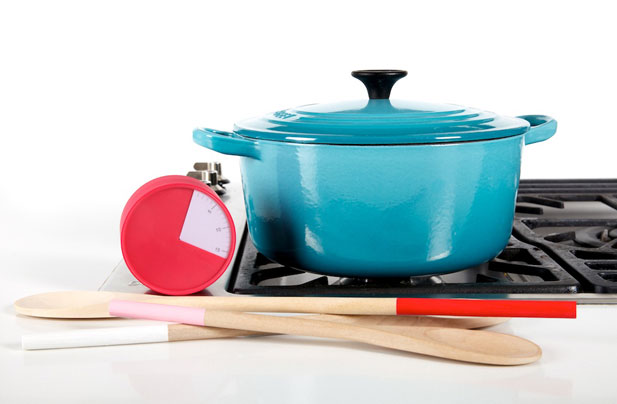 With the pot set on high heat, the highest in fact, we waited. And waited. And waited some more. After what seemed like a dark age, our rhubarb pink timer tinkered a tune. Still no bubbles. Hmm, was this Le Creuset pot enjoying all the attention? We needed some furious boiling to put the spoon to the test. No matter, we put a lid on it and after a serious case of stage-fright, steam and eventually gurgling sounds churned within. Lid off, spoon on and some more waiting. 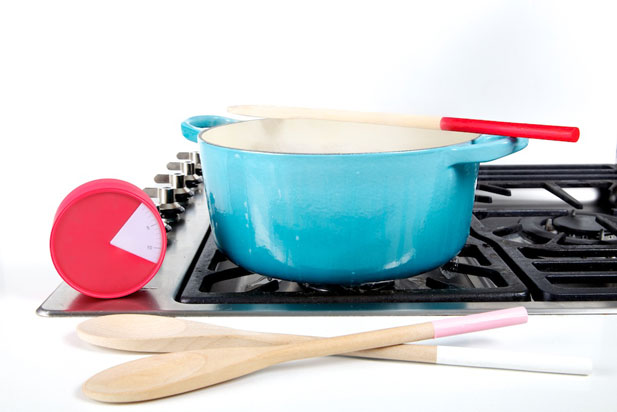 We’ve got to be honest with you here. While we would love to report that the rising froth obediently subsided upon tickling the wooden spoon, there was no such luck. The water just kept boiling politely at a respectable distance away from the spoon.

We even added pasta hoping to aggravate the mix into a rapid state of over boil. Apparently some foods contain ‘surfactants’, which are little compounds that lower the surface tension of a liquid, and in this case, act as foaming agents. The surfactants in pasta are lipids and proteins. 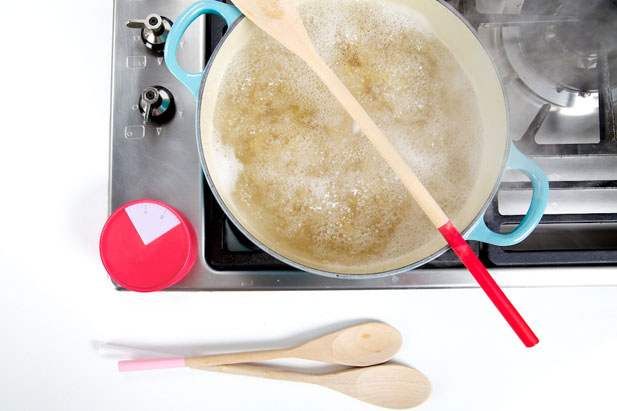 And yet, even with all these bond-breaking little lipids, no eager over boiling came close enough to test the true power of the spoon. Others have researched this myth before and found that a wooden spoon firstly absorbs some of the heat from the pot and secondly breaks the surface tension of the bubbles, stopping them from building up but all we can be 100% sure of is that a watched pot never boils.

Have you tried this myth at home or is it just a myth-nomer?